The Oakville Stitchery Guild is still going on, in spite of Covid and its restrictions, albeit still via Zoom. And people are still creating, which is just wonderful! Here are just a few of the beautiful creations of the members:

Our Gemma is still creating works faster than the rest of us can keep up with, the young woman just can keep going and going! It’s too many to show here, but feel free to look her up on Instagram under Gemma Burke. I’m including her one colour study in red, and her tree with fungus here, two of her hoop embroideries.

Joan has been doing stitching over lunch-time at work, and it certainly is nothing to be snuffed at. 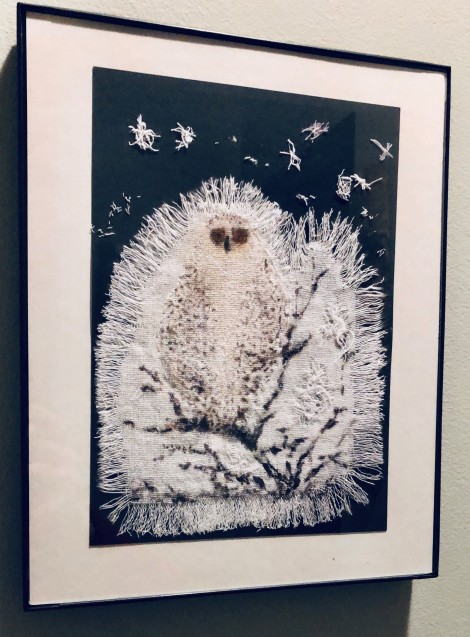 Shirley has been sewing little bags with the most beautiful and intricate stitchwork and making bags from it. This specific fabric was coloured by our dear departed friend Pat Greening, Shirley added the stitching and created the bag, and gifted the beauty back to Pat’s daughter.

Also on the topic of wildlife, Mary has been sewing turtles swimming, absolutely beautiful.

During lockdown, Nancy has been working with the materials that she had in and around her studio, and these primitive animals are what transpired. Have a look.

Sybil created yet another beautiful piece for yet another exhibition, this time in Grimsby. She calls it Dancing among the Ashes, after applying her beloved burning coals to fabric and then working her wild cucumber dancer onto the fabric.

Our remote member Wendy has been doing some square stitching, experimenting with all and every kind of stitch. This is her WIP.

Hermien retouched an older piece, by re-doing the moon.

Much like the rest of the Guilds, the Oakville Stitchery Guild could only meet online, but continued to share their endeavours and stitching adventures with one another – albeit without hands-on sessions which proved to cumbersome to do.

Here are just a few examples:

Judith did some exquisite boro work as per her three examples.

Debbie has been making sample projects as per a Danish group that she is a part of. She says they’re easy to join on facebook at Dogmi Broderi.

Liz skeletonized a leaf (cooking it with washing soda and gently washing away the pulp), and incorporated that into an embroidery. 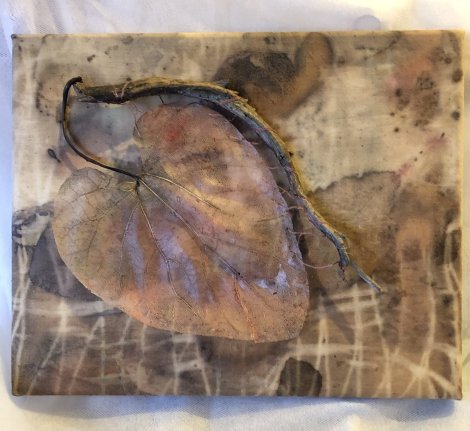 May you have a wonderful festive season!

The Oakville Stitchery Guild has had one Zoom meeting in the last three months, and will have the second one on July 26th.
People are continuing with their bug book project, and currently in the Artus exhibition, the bug of Joan Lindo’s can be viewed in all its splendour on the piano.

Also in the Artus exhibition, is the following fibre art works by our Guild members are on show: 3 Works by Anne MacMillan, who sadly passed away on July 11th, making her work especially poignant at this time. 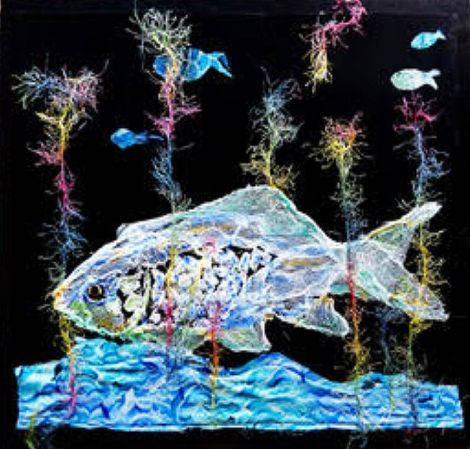 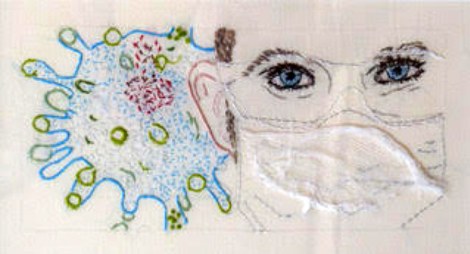 Also two pieces by Barbara Hodkinson, who works on water-colour prints on fabric, one piece by our remote British member Wendy Nicholson, one piece by Roberta Eustace, and three by Debbie Bianco. 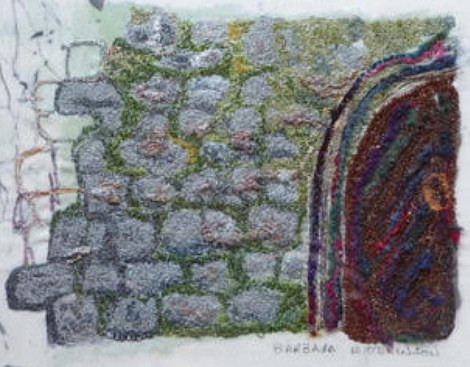 We’re making quite the splash!

Like everybody else, the Oakville Stitchery Guild sadly had to cancel their last meeting in light of the coronavirus crisis, however before that we still had really good fun.

We are jointly working on a bug book that we want to bring out – every member can submit their bugs in any way shape or form, and the photographs will be compiled in a book. Amira just sent us her one submission, she opened a can of worms, it seems! And Debbie expressed her love of bees in an embroidery piece.

Also, during the January hands-on-session, the group worked on pendants. We had some of Sybil’s spectacular pendants as inspiration and we are all currently working to complete our own.

Nancy presented a cheesecloth workshop that produced wonderful results. You can see here a sample that Mary created as an outflow of the workshop.

During the February meeting the hands-on session was about collage, and more bug items were brought in. 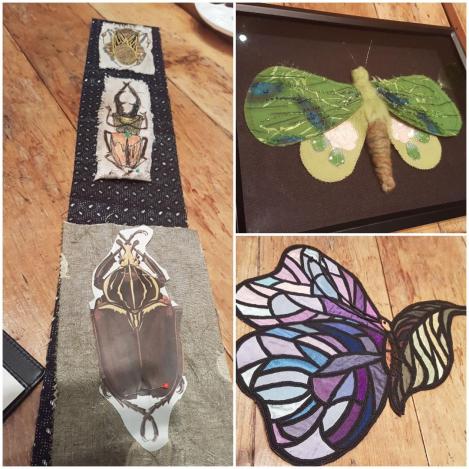 The Oakville Stitchery Guild kept their dizzy pace and there were so many
wonderful creations to celebrate!  Here are some of the highlights.

During the Indigo Dyeing Workshop, our own Barb Hodkinson showed us the
ropes on indigo dyeing.  We dyed as much as we possibly could and there are
so many wonderful examples, but here you see some of Janet’s results from
this day.

This was followed by a Wool Sweater Bag Workshop.  Participants got an old
wool cardigan and felted it beforehand, and again thanks to Barb, we were
taught how to turn this into a handy bag for everyday use.  Some people used
their indigo dyed sweaters for this, but attached you see Mary’s bag made
with a grey sweater that was felted.

During our hands-on Dorset button session, we learnt how to create these
magical buttons the way they used to.

During one of our hands-on sessions, we also got shown by Sybil how to take
her home-made walnut juice for a spin, as per the picture here. 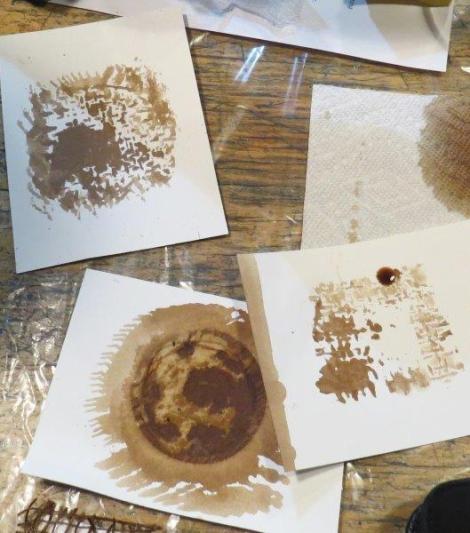 We still have a smocking workshop as well as a sewing box workshop coming up
in the near future, should there be enough interest.

During the summer break our members have remained busy.

Apart from the in-meeting hands-on sessions reported the last time, we have also already scheduled the following four workshops:

Nancy attended a cheesecloth workshop with Mary Pal. She brought in the work that she started, with her final accomplishment being the most fantastic horse image.

Given the hands-on Dorset buttons of the first meeting of the year, Leeanne brought the Suffolk pokes that she made at a workshop some years ago.

Helen attended a workshop with Naomi Smith, who teaches beadwork the way it is done by First Nations groups, and Helen completed this beautiful bag.

Our Guild is planning a Bug Book, where every member will have the chance to submit one (or plenty) bug works that will be photographed and placed in the book along with a little write-up about the artist. Gemma has gotten a head start on bugs by making a vast quantity of fantastical bugs that can go into a book. They are double sided and there are already a dozen or so completed!

Debbie worked on two projects during the summer, both embroidery pieces. See her most beautiful embroidery on black fabric that was bleached during one of our hands-on exercises.

Our Guild’s own Barbara Hodkinson held a tri-dye workshop for the members where three methods of dyeing were demonstrated and experimented with, namely using procion dyes, silk screening and marbling.  And as usual Barbara’s workshop was a combination of learning, fun and some fantastic results.  And who can resist using ultra-cheap shaving cream as a base?  Not us!

During the hands-on sessions we created talismans with the help of rock-friends, and Wendy, one of our remote members, created the beautiful talisman complete with butterfly that you see here.  Another time we had a bleaching seminar, and Debbie our president has already started creating the most beautiful work from her bleached black fabric.

And then there is Gemma, who produces critters at a faster rate than most people can process – each one a masterpiece.  This time around it was a tortoise, who could come clean out of its shell, too divine!  And on the shell lives a tree and in the tree swim the fishes, what can I say!  I’m only including the photo of it safely in its house, but had a hard time doing that, as the buff tortoise is as sweet as the housed one.

We have laid out our plans for the hands-on sessions for the next year, and among the ideas are: 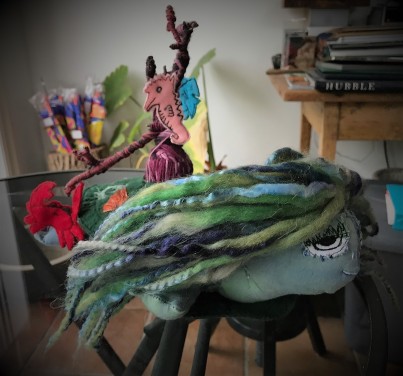 The Oakville Stitchery Guild has been busy with workshops.
Barbara Hodkinson gave us a stumpwork workshop and instilled in us a huge respect for that skill set. We have several members who are really accomplished at stumpwork, so it was great for the rest of the group to learn a bit more about it.

Debbie Bianco and Hermien Venter gave a Critters and Monsters workshop inspired by the work of Amanda Louise Spayd after that, where we had loads of fun creating troll-like dolls.

Our hands-on sessions during our monthly meetings are still turning out fantastic work. We created scissor fobs at the February meeting that now keep our small scissors from getting lost.

Also, Sybil Rampen from our group is currently having a retrospective show of her work at Joshua Creek Heritage Art Centre that also show-cases some of her fiber art from the last 7 or so decades of her work. It’s worth a look-see!

The Oakville Stitchery Guild had a second eco-dyeing workshop for its members, presented by two of our own members and, as the first time, it was a resounding success.

And because we love workshops so much, we will be having another workshop on stumpwork mid-January, again presented by one of our own.  Later in the year we will have a dyeing, silk screen & marbling workshop in the same manner.

During our monthly meetings we are continuing with our hand-on sessions.  The group made Christmas decorations, as you see below, during the November meeting.

For December, we followed the example of Constance Howard’s Colourama exercises and wrapped cards in different colour combinations for an exercise in colour, right after we celebrated the season with a potluck dinner. 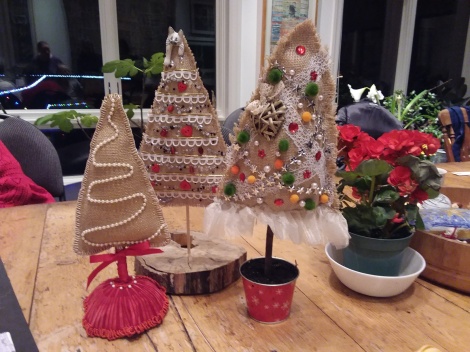 The calendar says Spring and though still somewhat chilly it is wonderful to see the blue sky and the sunshine!
After our wonderful as always Christmas Dinner at Joshua Creek, the guild has once again settled in for some serious stitching and investigating some different embellishments.
January – Hands on Fabric Brooches from scraps of fabric, thread, metal etc.

February – Fun with buttons – fish buttons & couching and necklace
Other finished show & tell items from our members.
Felted bag (with just the right button!).
Dying with onion skins and avocado peel
In our March meeting we will be exploring Fabric Collage.
In the meantime … Happy Easter and spring everyone from us at the Oakville Stitchery Guild

Our guild has had a busy year so far … Our new president, Debbie Bianco, welcomed all to the first meeting in September after our summer break. She explained that the first half of our meetings will be about the business of the Guild; the second half will be about fun and learning something new.

For that September meeting we welcomed a guest speaker, Ann MacMillan, who presented a wonderful showcase of her felting work – a combination of wet and dry felting and needle felting. 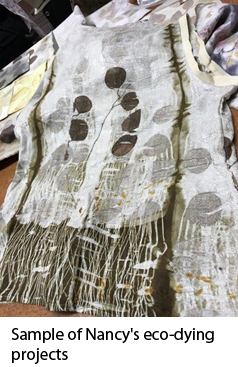 In October / November the ‘Joshua Creek Heritage Art Centre’ was the venue for ‘The Fibre Art Feast Exhibition’ featuring the ‘Connections Fibre Artists’ group. Several of our members submitted pieces for an accompanying Oakville Stitchery Guild exhibit which was very well received.

For our October meeting we worked on a series of ‘Twinchies’ – a fun project – to get us thinking quickly.

At the end of October we engaged Monika Schaefer for a 2-day workshop on felting. All who attended had a wonderful time and learned much from Monika – we learned techniques with wet felting – on its own and with silk, and needle felting. 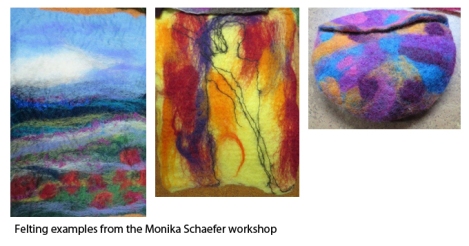 For our November meeting project we made fabric beads.

Our last meeting for the year will be next week – our Christmas Potluck. Our project for that meeting will be Handmade Felt Appliqué Pincushions … I’ll tell you about that in the next report.